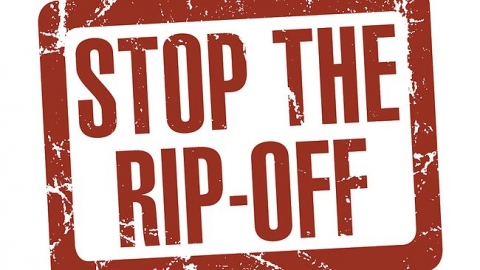 The great digital television rip-off sits right up their atop the podium and it is unlike any other because of the decade of false promises, made by an industry now struggling to stay afloat, about how digital television will amaze us with its remarkably high quality and at the same time the electronics industry has made a fortune selling digital televisions that many of us cannot use to their full potential due to the low quality of digital television transmission. The problem and why there should be something done is detailed in Business Spectator.

It’s debatable as to what the greatest corporate rip-off in history actually is, but there’s one standout candidate that ticks all the right boxes: the digital television industry.

We’re not talking about rip-offs like the $US65 billion Ponzi scheme run by Bernie Madoff that collapsed in December 2008, or Volkswagen’s diesel emissions scandal, but industry-wide practices that are condoned by governments for reasons that are not entirely clear, that cost consumers tens of billions of dollars and provide products or services that don’t live up to the hype.

What is it about the digital television industry that earns it the top spot on a list of the greatest corporate rip-offs in history?

Television executives refer to them as ‘evergreens’ but for many of us they’re nothing more than an attempt to turn us into reluctant cast members of Groundhog Day: movies that are rerun quarterly or in some cases more often across multiple television channels include The Shawshank Redemption, The Magnificent Seven, National Treasure, and When Harry Met Sally.

The shift to digital television and the corresponding increase in the number of broadcast television channels has not helped increase the size of the evergreen list, which contains no more than about 50 movies, with new films being added to the list only when falling ratings provides a reason for a movie to be dropped.

How often should the Lord of the Rings trilogy, or the entire Star Wars and James Bond catalogues be shown each year? Do you scream and reach for the remote control or sit down to enjoy a movie that you already know every scene?

The question as to why we watch movies over and over is similar to why we listen to the same music, but at some point you might decide to watch one of the other 10,000 or so movies made in the last millennium and find that you cannot because of the way that the television industry operates.

There’s a mind-boggling amount of effort carried out within the television industry to work out what movies to show to maximise advertising revenue based on viewer numbers and to minimise the amount paid to the movie rights holder.

But are the people providing feedback on their viewing habits really representative of the general public or people wanting to have a laugh at our expense?

It’s not as if the television companies cannot get their hands on the movies in a higher resolution from the movie studios, because they can. Most of the movies watched on television are also made in a high-resolution format for cinema and other media like DVDs. The problem is the lack of incentive for television companies to seek a higher resolution copy of a movie that’s already loaded in their systems and ready to show in the digital equivalent of the analog format.

This is not to say that none of the repeats shown are in the old low-resolution format, because we’ve all experienced the hoohah created by television companies about a showing of a ‘digitally remastered’ movie to be shown ‘exclusively’ on one of their channels. Not surprisingly, the same digitally remastered movie is likely to appear in the near future on other channels belonging other television companies.

Another annoying habit the television industry has adopted as a ‘norm’ is repeating a movie on each of the television company’s digital channels over a couple of days. This seemingly commendable effort to ensure that those that miss the first viewing can watch the movie the next day is more about filling time on each of the channels. Surely even television executives know that viewers can record a movie if they’re going to miss it.

The television industry has perfected the art of justifying reasons for practices designed to prevent viewers from actually getting what they want, which is a reasonable mix of new and old shows shown using quality and resolution improvements matching the hype surrounding digital television.

Along the way it has also managed to treat the viewing public over the past decade as dummies that are happy to watch whatever is shown on digital television irrespective of the quality. And it’s the promise of far better quality that has led to consumers spending a mountain of cash on new digital televisions and set-top boxes over the past decade.

Today this digital equivalent of the analog television format is known as 576i. A ‘high definition’ format known as 576p was also later added to digital televisions.

The number represents the number of scan lines in a frame displayed on the television and the ‘i’ and ‘p’ indicate how the scan lines are drawn.

After 576i and 576p came the MPEG-2 formats 720p and 1080i. Dutifully the consumer electronics industry shipped new digital televisions and set-top boxes for 720p and, at a later point, 1080i meaning that many consumers were now onto their third plasma or LED television and the decade was not yet over.

Recently the consumer electronics industry has shipped digital televisions every couple of years capable of showing digital formats including 1080p, 4K (2160p) and 8K (4320p) and a myriad of variations including supersized 90 inch LED or OLED and curved televisions.

If you like to keep at the cutting edge of technology, in as little as 15 years you might have purchased five televisions for your lounge room and consigned the older televisions to other locations around the house. With high quality 90-inch 4K televisions selling for over $12,000, it’s easy to understand why some households have spent upwards of $100,000 over the past 15 years keeping up with the digital television revolution.

If set-top boxes, personal video recorders (PVR) and additional televisions used in other rooms in the house are added into the total the amount spent becomes astronomical.

Having spent all this money to watch digital television, you sit down to watch a show on your brand new digital television capable of showing 1080p, 4K or 8K formats and find out that the television companies transmit using 1080i (rarely), 720p (more commonly) or the older 576i. And if watching a show in the low-resolution 576i is not bad enough, then you might not be surprised to learn that the television companies have one more ace up their sleeves: the ability to transmit using different quality ratings in each of the transmission formats.

The level indicates what the decoder must be capable of processing by stipulating a maximum picture resolution, frame rate and bit rate and as the level increases for a particular picture resolution then the cost of the decoder increases. The digital televisions being sold today are likely to be far more capable than needed as the effective bit-rates for each of the formats being used 1080i and 720p are set very low and the quality of what people are viewing is remarkably poor.

Now you know what that halo is that appears around footballers when you’re trying to watch a game. The halo indicates the transmission format quality settings are incredibly low.

While it’s generally accepted that transmission at 1080p provides a higher resolution than 1080i and 720p, the actual received picture quality might not be as good depending on the encoder profile used and the capability of the digital television’s decoder.

Digital television transmission quality is left up to the television companies, and there is no regulatory control over the minimum bit-rate for each of the transmission formats as there appears to be a belief that consumers will complain or shift to watching another channel if the quality drops too far.

The television companies believe that consumers will put up with poor quality and over time come to accept what is being provided.

You might wonder why the television companies are prepared to transmit low-quality television using reduced bit-rates. Take a look at your program guide and you’ll notice that the number of shopping and specialty channels focusing on topics like cooking has increased over time.

So what this means is the television companies are using the improved digital television technology to lower the quality of what is being transmitted to squeeze in more channels in an effort to increase revenue.

An industry in crisis

The television industry is slowly but surely bringing about its own demise and arguments that the internet and increased competition from media streaming companies are the true cause are only partially right.

The digital television industry has failed to grasp the true meaning of the digital revolution and that is increased quality. Consumers were promised high quality high resolution television and rather than provide this television companies have instead embarked on a self-destructive path. As the quality drops consumers are seeking alternative entertainment sources and this means internet streaming.

Some may be sad to see the television industry in decline, but as participants in what is the largest rip-off in history not just in monetary terms but also in trust there can be little sympathy. Time to see what’s available online.