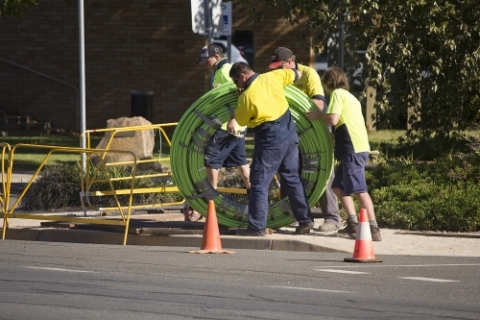 In Business Spectator the discussion is on how the rollout of the National Broadband Network continues at a sedate speed and the litany of excuses from NBN’s management only further highlights why the multi-technology mix (MTM) approach was always fraught with danger. Recently, NBN boss Bill Morrow made a few interesting, some might say injudicious, observations about the rollout of the network and the role the previous NBN management had played in the problematic construction process.

The rollout of the National Broadband Network continues at a sedate speed and the litany of excuses from NBN’s management only further highlights why the multi-technology mix (MTM) approach was always fraught with danger.

Recently, NBN boss Bill Morrow made a few interesting, some might say injudicious, observations about the rollout of the network and the role the previous NBN management had played in the problematic construction process.

Morrow told The Australian’s Beyond the Boardroom series that “If I look over the next two or three years, we have a shortage of about 4000 people and I don’t know where we’re going to get them to be able to do this at this point without launching a massive retraining program to move people from other industries to come in.”

He then went on to spruik the idea that the performance based contracts recently signed with five construction partners are somehow different from contracts put in place by the previous management team when he said “In retrospect, we should have been putting performance-based metrics in place with the delivery partners early on. We should have been doing the analysis that we have just conducted, in terms of how many positions we are going to need to have in place to meet our 2020 objective and what are the skill sets that are required from each of those.”

The construction approach adopted by NBN has been a failure from the beginning of the rollout due to the lack of experience and expertise amongst telecommunications construction companies, the need to train and deploy about 25,000 workers nationally and the government departments insisting that construction contracts be time limited to about six months duration for each contract.

In 2012, the worker shortage became very evident as the rollout finally kicked off in earnest after the protracted negotiations between NBN and Telstra were given the go ahead by the Australian Competition and Consumer Commission (ACCC).

At the time a NBN spokeswoman stated that company was “projecting an external workforce of 16,000 to 18,000 at the peak of construction.

This projection was at the time identified to be far below what would be needed for the rollout to be completed by 2020 and susceptible to the construction companies not wanting to bring on more staff due to the “small chunk” rollout approach that prohibited a faster ramp up of worker training and deployment of trained workers into operational rollout crews.

At the time my estimates of the delays that would be caused by the outsourced piecemeal rollout model was between five to ten years. And the government departments behind the restrictions on what the previous NBN Co management was allowed to do must shoulder a significant proportion of the blame for the current mess.

In 2009 there was talk of NBN creating an internal construction division and utilising universities and TAFE to train workers but the telecommunications industry quickly put a stop to this approach and the worker training has been largely carried out by privately owned industry training companies which further delayed the availability of trained workers.

Morrow described to The Australian of the need for a new training program to be devised by nbn that will look to forge partnerships with institutions to create training pathways and alleviate the current skills shortage.

“I think it’s a very robust program that will take advantage of companies like AIM as well as TAFE, universities and then a number of other institutions to be able to do it, but this is a conscious effort that we must have and needs to be backed by the program.”

It’s 2009 all over again and we have Morrow trying to convince Australians that a new program, designed to leverage the universities and TAFE,  will be utilised to overcome the skills shortage and Morrow’s management team is somehow at the mercy of poor decision made by his predecessors.

And how can there be a skilled worker shortage when construction companies are sacking workers due to the shift to the MTM NBN and a Visionstream spokeswoman told News Corp Australia that "The revised mix of work means we need to change current staffing ratios." And where are the Australian fibre rollout trained workers to be found? New Zealand and in other countries that have had the foresight to commence FTTP rollouts.

In 2012 the Communications, Electrical and Plumbing Union expressed concern over the potential for a lack of skilled workers to slow the NBN rollout. This concern came at a time when the government spent $100 million on training current and former Telstra employees to be part of the NBN rollout.

The Communications Division of the union (CWU) had identified a lack of trained workers in 2008 when the NBN might have utilised Fibre-to-the-Node (FTTN) and was quoted inComputerworld arguing that NBN should be required to “specify how they intended to meet the skills requirements involved in building, maintaining and operating the proposed FTTN” and identify areas of anticipated shortage.

It is unsurprising that with the government’s decision to change the NBN rollout from FTTP to MTM, including FTTN VDSL2/vectoring, that there will be a skills shortage because the focus of the construction companies over the past five years has been to train and deploy workers skilled in how to deploy fibre.

What this means is NBN is now facing a self-imposed shortage of workers that have experience and the skills needed to rollout the obsolete FTTN VDSL2/vectoring technology.

The CWU is predicting another government handout to alleviate the skills shortage and the beneficiaries will be the construction companies and an industry that should have stood up and demanded the FTTP rollout continues, with the addition of Telstra’s HFC network to the NBN.

The solution for the construction companies is likely to be workers on 457 visas and there is a warped logic for this to occur because there is no future for Australian workers trained with FTTN VDSL2 beyond the immediate rollout. In 2020 or before, when the NBN is sold off the new owners are likely to immediately commence a rollout of G.Fast or FTTP to meet booming customer demand.

And the Communications Minister Malcolm Turnbull’s recent remarks that the low uptake of higher NBN speed tiers justifies the government’s decision to rollout a second rate NBNshould be seen for what it is. It's not that Australians do not want access to higher speed tiers but that Australia’s massively overpriced NBN and telecommunications backhaul means that Australia is the most expensive industrialised country in the world for broadband access.